Ethan Suaste Joined the United States Marine Corps in fall of 2010 and attended MCRD West in San Diego. After successfully completing Boot Camp he was assigned to Infantry Training Battalion Camp Pendleton, where he completed basic infantry skills and was assigned as a 0331 Machine Gunner. After completing his specialty infantry skills he was stationed at Camp Horno with the Third Battalion, First Marine Division, Weapons Company CAAT 1 (Combined Anti-Armor Team).

He served two deployments with 3/1 on the 11th MEU (Marine Expeditionary Unit) and a deployment to Okinawa, Japan. After four years with 3/1, Corporal Suaste (at the time) served two more years as a rifle coach at Edson Range training recruits through the rifle qualification course. In 2016 Sgt. Suaste retired from the Marine Corps and moved back to his home town of Sacramento, CA.

​Brave Coyote is a three-piece Alternative/Progressive Rock band from Sacramento, CA. Guitarist, Kyle Woods, and bassist, Ethan Suaste, have been playing together on various musical projects since 2003. In 2017, drummer Anthony Bryant was brought on and Brave Coyote was born.  Since then, we have released a three-song EP and have played multiple local venues including The Boardwalk, Holy Diver, and Powerhouse. We strive to create pure original material that ranges from introspective instrumental melodies, to riff-driven audible thunder. We are currently working on putting together a full-length album and hope to have that completed in 2019. 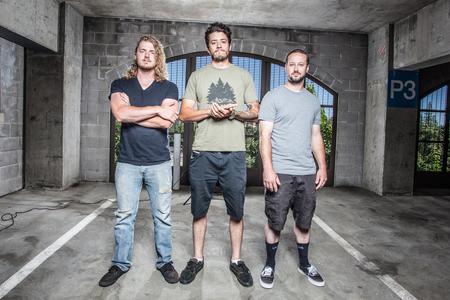